#GE2017 Analysis: Are We In For A Youth Turnout Shock?

According to received wisdom the majority of young people in Britain are apathetic.

Based on historic trends, it's difficult to argue against the idea that youth apathy will strike again this Thursday, but in a tumultuous political climate in which received wisdom is being consistently undermined, even this taken-for-granted assumption may be turned on its head.

Youth Engagement Has Been In Steady Decline Since 1992


The downward trend in young people turning out to vote over the previous six general elections is stark.

But The EU Referendum Has Re-engaged The British Public


Evidence suggests the EU referendum had a hand in raising levels of engagement in the country, with overall turnout rising to 72%, the highest since 1997.

This effect was particularly strong with young voters, with turnout among 18-24 year-olds rising once again to levels not seen since 1992.


We Saw A Similar Effect In Scotland After The Indy Ref


Scotland experienced a similar re-engagement in 2014, with an unusually high turnout of 85%.

Turnout dropped in the next two election years, but remained relatively high compared to previous elections to suggest the referendum had a semi-lasting impact on political engagement, although it is now starting to taper off.

Pollsters have estimated party support in different ways, with the main discrepancy appearing to lie in how they weigh likely turnout among younger voters.

These modelling differences generate outcomes ranging from a record-breaking Tory landslide to a hung parliament.

... But This Election Campaign Has Excited Young People


This campaign is remarkable not only for the Corbyn surge - something which hasn't been fully explained - but for data showing increased excitement among young people.

Pollsters normally ask people they survey how certain they are to vote (from 1 - 10) in order to measure likely turnout and accurately weigh their raw data samples.

The number of young voters voters answering "10 - absolutely certain to vote" has dramatically risen over the course of the campaign.

... And This Is Reflected In 2017's Last-Minute Voter Registration Surge


Compared with 2015, an unusually high number of voters registered to vote in the final 21 days before the registration deadline - broadly reflecting the numbers from 2016.


The number of applications from young people - both as a proportion of all applications and in absolute numbers - was unusually high. 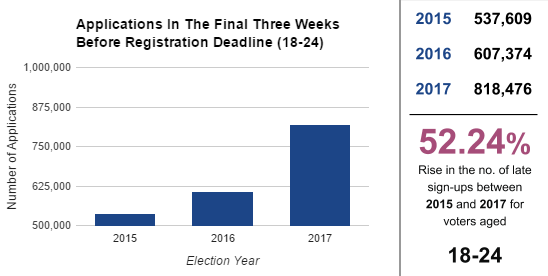 What Does All Of This Mean?


Quite possibly, absolutely nothing. Firstly, all of this evidence is circumstantial. Secondly, since polls largely only measure vote share across the country - and not levels of support in individual seats - even a 50:50 split between Labour and the Conservatives could lead to dramatically different seat tallies depending on where the votes fall across the country.

While pollsters have reached a consensus on both the Corbyn surge and increased engagement among under 40s, they have been unable to pin down to what extent this will make a difference.

But based on all the data I would commit to predicting young voters will turn out in 2017 at a significantly higher level than in 2015, broadly reflecting turnout across the age brackets recorded after the EU referendum.


Speaking on BBC Radio Five Live in the early hours of Friday morning, Professor Jon Tonge, an academic with Liverpool University, told listeners: "The early data suggests this is the first election since 1992 in which a majority of young people, by which I mean 18-24 year-olds, have come out to vote."


Post-election demographic analysis from pollster Ipsos Mori proves this claim holds true, with 64% of 18-24 year-olds and 64% of 25-34 year-olds having taken part.

Writing on the impact of the shift in demographics, Thiemo Fetzer, assistant professor in economics at the University of Warwick, said: "The results suggest that the major reshuffles in turnout were predominantly due to the (soon to be) grey voters not turning up to vote in 2017 relative to younger voters.

"The Labour party was the big winner, catching almost as significant share of the increase among young voters."

Representatives from both Ipsos Mori and YouGov were approached to comment on the significance of the turnout among young people, and whether this can be sustained in the future, but neither were able to respond to my requests at the time of writing.