Never Mind Kingmakers - The DUP Will Be Queenslayers For Theresa May 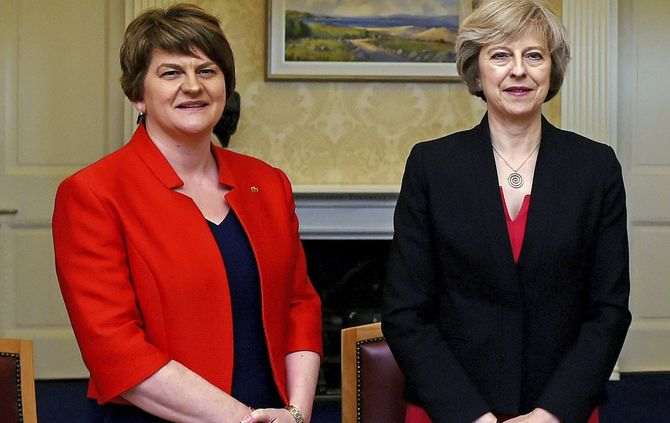 As I write this, #DUPcoalition is currently trending on Twitter. Earlier today, the Democratic Unionist Party’s own website crashed, after the public frantically googled just who, and what, the DUP was, and why Northern Ireland suddenly seemed to hold all the cards with regards to Theresa May forming a government.

It’s fair to say the snap general election didn’t quite go the way the Conservative Party was hoping. I could write paragraphs about everything that went wrong, but I won’t, because that’s already been done to death over the last 24 hours.

The Tories were expecting to crush any last semblance of the mainstream left, and return a 100-plus seat 'supermajority', storming key Labour heartlands in the process. But instead, May’s gamble horribly backfired. The Tories lost their majority, with Corbyn’s Labour defying all expectations to steal a clutch of Tory seats (with the shock of the night belonging to Canterbury, held by the Conservatives for 99 years).

As many have pointed out, while Theresa May won the numbers (while still not making up enough to form a majority) she lost the night, with Corbyn losing the numbers, but winning.

Falling short of an overall majority, May has now turned to the right-wing DUP in Northern Ireland to help prop up her government. This, in my opinion, has sealed her fate quicker than if she had tried to form a minority government, and the very party she’s relying on may end up being the poison that kills her leadership, and serves as the final nail for her credibility within the Conservative party.

Let’s start with the obvious. The DUP run on an unashamedly anti-LGBTQ+, anti-abortion platform; their stance similar to that of the American Republican party.

And I would have loved to have seen David Cameron’s face when he heard the news Theresa May was looking to them to prop up her government. For all of Cameron’s faults, his one real achievement was to modernise the Conservative Party (or rather, the Conservative and Unionist Party as May emphasised in her speech outside Downing Street), and pull them somewhat to the left socially. It was, after all, under Cameron’s premiership that same-sex marriage was passed (although not without discontent from members of his own party).

Don’t get me wrong - I’m not arguing that homophobia has been eradicated under the Conservatives, or indeed that women have now got it A-OK, and everything is fine, and equal. But in mainstream British politics, a woman having an abortion, or a gay person getting married, isn’t something we’re about to turn the clock back on.

This is in stark contrast with the DUP, which is openly homophobic. For example, besides a well-documented objection to same-sex marriage, in 2013 DUP Assembly Member Tom Buchanan told children at a school that homosexuality is "an abomination". For a woman who once said the Conservatives should move away from being the "nasty party" she has sure as hell picked a rather interesting set of "friends" to make a deal with.

I wonder how any of the 45 new LGBTQ+ MPs elected to parliament feel about the DUP playing kingmaker? Plus, I’d wager there’s more than a few centrist Conservative MPs who are uncomfortable at the prospect of joining forces with this lot, including a new batch of Scottish MPs under the leadership of Ruth Davidson.

There’s also the rather delicious irony of spending your entire campaign labelling Jeremy Corbyn a terrorist sympathiser, only then to rely on a party endorsed by active paramilitaries in Northern Ireland. The hysteria from the Tories on who Corbyn may or may not have met with 30 years ago also seems hilariously hypocritical, particularly as DUP leader Arlene Forster met the UDA boss Jackie McDonald 48 hours after a loyalist murder in Belfast.

Finally, to Brexit; what this snap election was meant to be all about, and yet was curiously absent for most of the campaign.

It's said that part of the deal the Tories brokered with the DUP is that they would concede on a hard Brexit. This raises all manner of problems in itself, particularly when May has been constantly playing up the the hard-right of her party who are eager for a "no deal" with the EU if they aren't given whatever they want. This puts May at odds with her "strong and stable" mantra - something I feel we will never hear the Tories utter again - and which won't play well with the faction of her party she's been courting.

This ignores the fact we still aren’t any clearer as to what Mrs May’s Brexit will look like for the UK, never mind the deeply complex issue of the Irish border.

I don’t, and will never claim to be, anything close to an expert regarding Northern Irish politics; but there are a whole range of domestic issues in Northern Ireland that May hasn’t considered, making her alliance with the DUP even more misguided.

The idea of a Conservative-DUP coalition may rightfully seem like a frightening and disturbing prospect (interesting they’ve been careful to describe this as a "confidence and supply" arrangement), but falls before the first hurdle.

There are too many obstacles - even without involving the DUP - for Theresa May to govern effectively and command the respect of her party, let alone touching on their climate change denial and creationism.

If I was a betting man (and I’m not) I’d be eyeing the odds of another general election in the autumn. But right now, Theresa May is a wounded prime minister - self-inflicted - with her reputation shredded. Making friends with the DUP might have just eliminated what was left of her.
Posted by Fmilligan at 14:18