What Happened in Richmond Park Anyway?

The Richmond Park by-election campaign was, by any conventional standards, a mess, yet in the current political climate this couldn't be any more appropriate.

Zac Goldsmith, who ran a torrid campaign only a few months ago to become the Conservative Mayor of London, resigned his seat in protest at the government's decision to expand London Heathrow, This decision was based on a promise he'd made before 2010; to leave the Conservative Party and stand against them as an independent.

He immediately set out to frame the campaign as a "referendum on Heathrow" which, at first, made perfect sense. But the local Conservative branch, in an extraordinary step, then decided to back Goldsmith, which left CCHQ in limbo - in the end choosing to step aside so as to prevent splitting the "conservative" vote.

After the Liberal Democrats picked their candidate, the Green Party decided to step aside too, so as to avoid splitting the anti-Goldsmith vote. Labour's NEC, despite reservations from senior figures, decided to field a candidate, while UKIP was the third major party to back off, throwing its weight behind Goldsmith. 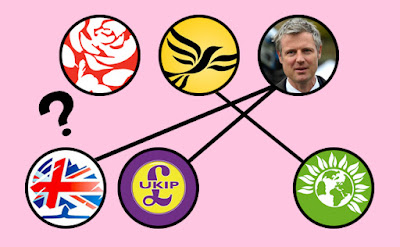 Not everything, however, was as simple as it looked...

The Green Party, in a pragmatic move, decided to back the Lib Dem candidate Sarah Olney in a "progressive alliance".

But Zac Goldsmith, who has previously gotten along well with Green co-leader Caroline Lucas, allegedly suggested she was backing him, while distancing himself from UKIP - who had mostly definitely endorsed his candidacy.

The local Greens said they were "deeply disappointed" in Goldsmith for making the suggestion on one of his leaflets, and a spokesperson was forced to refute any allusion to Green support for Goldsmith on the Green Party website.

Reports then emerged that the local Greens were also disappointed in Caroline Lucas for backing the "regressive" Lib Dems, with prominent local members writing a letter to the Guardian to express as much, and some figures even urging Green voters to back the Labour candidate instead.

As for Goldsmith, who was being backed by the local Conservatives, and prominent pro-Heathrow expansion Tory MPs such as Jacob Rees-Mogg, towards the end of the campaign wouldn't even rule out re-joining the Conservative Party in the near future.

Zac Goldsmith's attempt to frame the by-election as a "referendum on Heathrow" fell apart shortly after it became clear each of his rivals shared his view, and the government, officially backing Heathrow expansion, would decline to field a candidate.

Tim Farron, who called this the contest "the most important by-election in living memory," when I spoke with him this weekend instead tried to frame it as a(nother) referendum on Brexit - holding several events over the last few weeks including an overwhelmingly pro-EU Brexit Q&A on the final Saturday of campaigning.

The reason for this was obvious: 77% of Zac Goldsmith's constituents voted to remain while Goldsmith, who they have returned twice, has been long-known as a proud Eurosceptic.

At the time of writing the winner hadn't been declared - but, for the purposes of this post, it doesn't matter.

This by-election has been messy, disjointed, and it has made a mockery of our electoral system, with three of the five major parties (as I see them), including the party of government, backing away from the fight.

The cost of running the contest has been touted as lying somewhere between £240,000 and £250,000, depending on which source you've consulted - a big price, in my view, for what was ultimately a pointless distraction - and one that may end up costing Goldsmith his seat.