There Is No Ceiling - The 'Corbyn Surge' Isn't Over

Both candidates were, at first, a great source of ridicule. They were underestimated both in their appeal to voters and their campaigning abilities, and both outperformed expectations whenever they were challenged.

Then, after Trump saw a modest rise in his popularity in the Republican primaries, he was given a "ceiling" - a point above which his support could no longer rise; and one which a gaggle of pundits comically raised every ten days once he surpassed this arbitrary limit.

Trump himself was aware of this ceiling, and addressed the point in February 2016 speaking to Fox & Friends.

But Rubio would point to your favourable/unfavourable ratings. He did that last night. He says you've reached your ceiling, Mr Trump.

Well they've been saying that Anna now for approximately six months - I've reached my ceiling. I started at 12 and I reached my ceiling, I went to 16 and they said "that is the ceiling - it's the most he's gonna get" and then the national polls are even higher, you know, in the national polls I'm at 44. And that's with five people. That's a lot of people, and I'm at 44.

Since April something similar has been happening with Jeremy Corbyn

This compounds a good week for the Labour leader as he pegged level with Theresa May on the question of 'best prime minister', and a weekend survey from the election's most accurate pollster, Survation, gave Labour a six-point lead.

YouGov's graphical representation of these ratings since August 2016 puts Corbyn's dramatic surge into context - with the turnaround happening over the course of eight weeks. 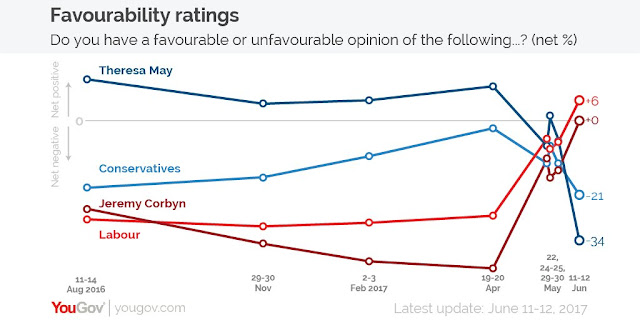 Corbyn too was given several ceilings during the election campaign, above which his 'surge' should not have exceeded.

What an amazing trip it's been this campaign pic.twitter.com/MtavwwngKS
— Nick Srnicek (@n_srnck) May 31, 2017


Moreover, the pollsters, minus Survation, to some extent herded in the final stretch as the last clutch of polls, including YouGov's tweaked final projection, wrongly reported a substantial Conservative lead.

Like Trump, Corbyn defied received wisdom, and has now emerged as one of Britain's most favoured politicians, having once been its most disliked.

What sparked the surge, and why it seems to be spreading at an unprecedented pace, has not yet been fully explored by the commentariat, but as things stand his meteoric rise shows no signs of slowing.