Is ‘Brand May’ a Show of Confidence, or CCHQ’s Insurance Policy?

In light of Theresa May’s historically high approval ratings, the Tory push for power has taken the form of a conventional US presidential campaign putting the prime minister front-and-centre.

It is so central to the campaign, that where you would normally expect to find ‘Conservative’ or ‘Conservative Party’ on official party branding, you will find instead ‘Theresa May’s Team’ - with party identity relatively obscured.

In the lead up to the local elections, CCHQ bought wraparound adverts with a host of local newspapers to promote not the Conservative Party, but Theresa May, a feature also found on leaflets, and in candidates’ messaging. The Conservative battle bus too is emblazoned with 'Theresa May for Britain'. 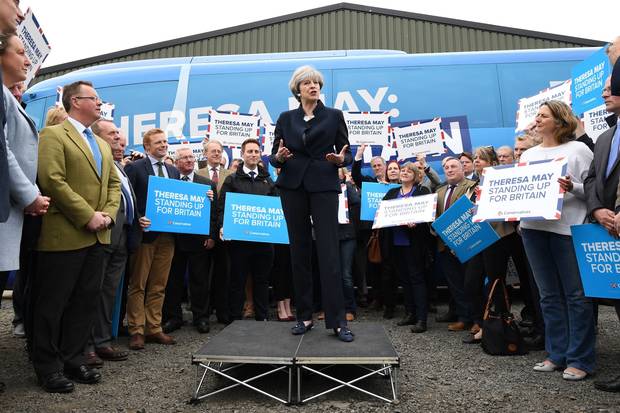 The thinking behind this is clear. Not only is Theresa May more popular than her party, but at the start of the campaign she boasted historically high approval ratings - higher than Thatcher or Blair at their peaks - with Jeremy Corbyn languishing far behind.

There are many theories behind her record-breaking popularity, from being a “basic prime minister for basic times” to having the luxury of being directly contrasted with her opponent - somebody widely regarded as being not up to the job.

This tactic isn't in itself unusual, with her predecessor running a similar campaign centred on 'competence over chaos under Ed Miliband'. Yet ‘Brand Dave’ did not replace the Tory identity; the two complemented each other to good effect. But this idea - in its current manifestation - is being pushed to the point of absurdity.

For instance, Theresa May is name-checked 16 times in the conservative party manifesto. By contrast, David Cameron was mentioned six times in 2015, and three times in 2010. In 1997, the Labour manifesto mentioned Tony Blair by name once.

Beyond serving as a handy electoral device, exploiting the unforeseen popularity of ‘Brand May’, perhaps this positioning allows the party to shield ‘Brand Tory’ from May’s most devastating flaws, should they manifest in the coming years.

Her indecisiveness, cautiousness, hypercentralised management style, and an over-reliance on a closely-knit team of special advisers (who carry torrid reputations) are examples of traits not adequately scrutinised; given most of the printing press are considered ‘on side’, and the opposition leader is seen as relatively hapless in the eyes of the public.

***
‘Theresa Maybe’, the Economist’s leader column on ‘Britain’s indecisive premiere’, was a frank assessment of the prime minister’s record six months after she took office, noting “it is hard to name a single signature policy, and easy to cite U-turns.”

This damning list, yet growing, includes backing down from a promise to put workers on company boards, reversing plans to compel firms to list foreign employees, scrapping Budget proposals to raise National Insurance, and changing her widely-berated ‘Dementia Tax’.

Moreover, the entire social care saga has exposed Theresa May’s greatest weaknesses in the unforgiving spotlight of a general election campaign; which leads CCHQ’s almost absurdist decision to make her the sole face of the next five years seem something of a masterstroke.

Moving forwards, the manner in which her flaws have been exposed with such ease may affect the outcome of the Brexit negotiations.

As the FT’s Janan Ganesh has noted: “If Mrs May did not know that old people feel attached to their asset base, she was derelict. If she did and (admirably) resolved to face them down, then her resolve does not amount to much. Colleagues who defended her proposal in public, lobby interests who fought it and any EU negotiators tuning in from the continent will infer the same lesson: this prime minister is strong and stable, until you test her.”

With Britain facing its greatest juncture in modern history the risk of wrecking our future prospects in trade, diplomacy, and prosperity, has never been greater. And, courtesy of leaks, we know preliminary discussions between Theresa May and her European counterparts have been disastrous.

By associating the next government with 'Brand May’, almost exclusively, CCHQ has given the party the breathing space it needs should May’s tenure end in catastrophe, with the foundations set for a clean rebuilding process - but not before first throwing the prime minister under the bus.
Posted by Unknown at 06:21